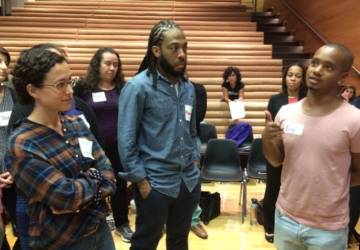 Teachers Get Schooled on Talking Race

Here’s the scenario: a teenage boy and girl are arguing about the presidential election in their school cafeteria. The boy tells the girl he’s supporting Trump because he’ll build a wall to keep out Mexican immigrants. The girl says she’s of Mexican descent and that she considers the boy’s remarks racist. A teacher overhearing this lunchroom conversation should:

A) Get the kids to calm down, tell them they’re each entitled to their opinion and change the topic.

B) Offer a history lesson on how Texas actually used to be part of Mexico.

C) Pretend not to hear it and leave.

D) None of the above

If you’re guessed D, you were right. Knowing what to say when children bring up race and identity can be tough. And they will bring it up, now more than ever, with the presidential race and recent killings of black men by police topping the headlines.

That’s why the non-profit organization Border Crossers, based in New York City, said there was growing demand across the country for its training. The group has been conducting sessions on how to talk about race since 2010 but co-executive director Benny Vasquez said demand skyrocketed in the last two years.

“Schools are aching for teachers to have the opportunity to talk about it, gain an analysis and also to help facilitate conversations with students about how to effect change,” said Vasquez, a former teacher from Brooklyn.

Here are three takeaways from a recent workshop for about 40 New York City teachers representing a range public, charter and private schools.

1) Know your history. Racism dates back many centuries, to when European writers and explorers first classified people by physical characteristics. It’s affected our social and political institutions, from slavery to segregation. Vasquez advised teachers to use this history and to add materials when necessary, “to have students see themselves in the curriculum and also see other folks in the curriculum as well.” He calls this a “racial equity lens.”

2) Know yourself. About 85 percent of New York City public school students are children of color; 60 percent of their teachers are white. One white teacher at the workshop, who didn’t want to be identified, said he tries to play to his strengths. “I think that white children should see me as a model as how to listen to other people, and how to acknowledge when I make mistakes,” he explained. With his students of color, he added, “I want to prove myself worthy of their trust.”

3) Know your students. Create classrooms where all kids feel safe. Children pick up clues from the world around them, and have their own biases. Vasquez said teachers – and kids – may feel uncomfortable talking about race but that’s part of the work. They must keep talking.

While some might not consider this essential work for teachers, Vasquez likened it to a core subject.

“When there’s a kid who’s struggling with math because he doesn’t understand math, know math, we work with that child,” he said. “And he might feel like I’m not adequate. And we build him up or build her up and we try to make them successful.” He said the same thing should be done about race and racism in our schools.

So what is the right answer to the example above, with the two teens debating Trump’s immigration stand? No teacher wants to pick sides in a political debate. Instead, Vasquez said teachers should strive for empathy, transparency and information.

With that in mind, one white teacher said he would tell the kids he hasn’t had the experience of being excluded based on his race. He’d ask the white boy to imagine a ban on European immigrants. Then, a black teacher named Dominique Mejia said she would help the boy connect with the Mexican student by saying, “As an African American, I would feel as badly as she’s feeling now if someone told me my people had to leave.”

Mejia teaches with the KIPP charter network. “I think that no matter your race, this is going to be difficult and uncomfortable work” for all teachers she said, afterwards. But in a diverse city, she added, it’s “absolutely your responsibility.”